Lambert Sonna, CEO
The war on cybercrime is far from over. In retrospect, the past decade reveals that even as technology progressed dramatically, on an equal footing, the cybercriminals have proven to be sophisticated and devious in adapting to new surroundings. Despite growing emphasis and awareness of cyber threats, the majority of organizations continue to experience massive data breaches. The reason: lack of robust identity proofing. Conventional security measures such as passwords and biometrics are unable to safeguard enterprise data and resources. This is where Global ID has been able to make a breakthrough with its innovative and affordable 3D finger vein ID technology.

Global ID is on a mission to transform the dynamics of the identification and authentication space by offering a highly secure 3D vein scanner—3DFVid. The finger vein ID technology is nearly impossible to fool due to the fact that the chances of two persons having the same vein pattern are 1 in 3.4 billion. “The vein patterns, unlike facial and fingerprint characteristics, do not change over time, which establishes this technology as the new standard for biometric security systems,” says Lambert Sonna, CEO of Global ID.

3DFVid is designed such that it creates a three-dimensional pattern of the veins beneath the skin. To obtain the 3D pattern of the veins, 3DFVid makes use of three components that include sensors, LEDs that emit Near Infrared (NIR) light, and cameras that capture the vascular image of veins. The company is supported by renowned Swiss institutes, namely IDIAP Research Institute for biometry, HES-SO Valais Wallis for scanner, and Ecole polytechnique fédérale de Lausanne (EPFL) for security and cryptography. Global ID also relies on the excellence of the CSEM to develop the miniaturization of its scanner. “Our ultimate objective with this innovative technology is to provide the highest level of security and privacy to data while addressing the disadvantages— like reliability, robustness, and high cost—of existing biometric technologies,” states Sonna.

The authentication process begins by scanning and capturing an individual’s finger image. During the image capture, the haemoglobin absorbs the NIR light and makes the veins appear as a dark pattern of lines. Once the image is recorded, the raw data is digitized, certified, and sent to a database.

By referring to these registered images captured by the 3D sensor, the volumetric images of 3D structures are created computationally. The protocol then compares and matches the extracted 3D finger vein patterns against a preregistered pattern in the database to recognize the individual.

Our ultimate objective is to provide the highest level of security and privacy to data while addressing the major disadvantages of existing biometric technologies that include reliability, robustness and high cost

In normalization, only the relevant information of the image is retained by systematically extracting the image Region of Interest. Subsequently, the biometric features such as the characteristics of a vein image are extracted and stored as a feature vector and processed for recognition. These features contain only relevant information such as orientation, length, and location. Finally, the given biometric feature vector is matched against the pattern database using a correlation coefficient. When it is identified as a registered pattern, the required action is performed. Further, Global ID uses blockchain technology to store and encrypt data while spreading it across thousands of nodes—unfalsifiable and indestructible. The access to this data is strictly subject to authorization by the user.

The effectiveness of the company’s finger vein ID system can be well-illustrated using a case scenario where Global ID implemented its protocols as a proof of concept for a renowned healthcare organization in Switzerland named Jura Hospital. The Jura Hospital decided to test a biometric identification system from Global ID called BioLocker to meet the requirements of the country’s E-Health initiative. The Swiss Confederation’s E-Health project required the implementation of strong two-factor authentication for access to patient data. Global ID’s biometric solution not only met those requirements but offered strong security, patient data control, and recognition of medical and health professionals even while wearing surgical gloves. “Our mechanism also allowed the system administrators to grant various levels of access to their end-users by fine-tuning the access control policy,” explains Sonna.

Apart from healthcare organizations, Global ID also offers their 3D finger vein recognition system to areas with high-security requirements such as civil identity, border control, education, transport, financial services and commercial transactions, as they rely heavily on access control technology as part of their overall security solution.
With several such success stories in their quiver, Global ID envisions becoming a leading B2B digital authentication solutions provider that addresses identity theft and data hacking. With the aim to have a worldwide reach, the company plans to expand internationally and enter markets such as the U.S. and the Asia Pacific. It comes as no surprise that the company has been awarded the Seal of Excellence by the European Commission for its revolutionary vein-based biometric authentication solution for healthcare. 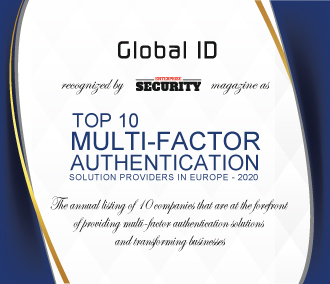 Description
Global ID offers a highly secure 3D vein scanner—3DFVid that is all set to transform the dynamics of the identification and authentication space. 3DFVid is designed such that it creates a three-dimensional pattern of the veins beneath the skin. The vein patterns, unlike facial and fingerprint characteristics, do not change over time, which establishes this technology as the new standard for biometric security systems. To obtain the 3D pattern of the veins, 3DFVid makes use of three components that include sensors, LEDs that emit Near Infrared (NIR) light, and cameras that capture the vascular image of veins. The company’s ultimate objective with this innovative technology is to provide the highest level of security and privacy to data